Some Brands Win, Some Lose as Branding Goes Rogue at SXSW 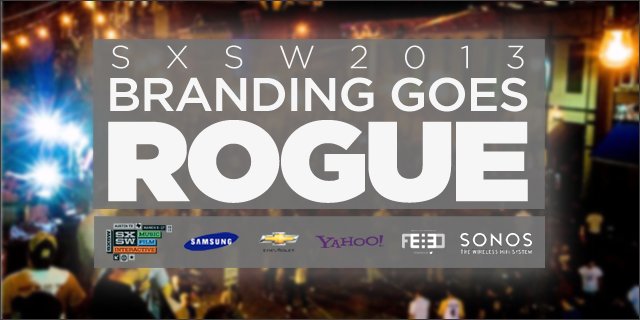 As a marketer, I am always fascinated by the “art of marketing,” from what gets your attention, to what gets you to buy. And, from what big brands are doing, to what smaller ones are doing to become bigger brands. I’m especially interested in the “why” as it relates to these things. This year, however, SXSW marketing gave me a little more “why” then I bargained for, as brands pined for the attention and time of over 500,000 people. Here are the winners of the SXSW Marketing Game:

1. Samsung – Samsung was clearly winning at SXSW with their battery swap promotion. With the picture/video taking, tweeting, music playing, and anything/all else we do with our phones, outlets were a commodity. Who wants to miss everything by sitting by a power outlet all day anyway?  Samsung saved the day with a promotion that had a freshly-charged battery delivered to you anywhere that you were by simply tweeting the hashtag #Poweron and your location. Bike messengers in blue battled the heat and traffic, simply swapped your battery, and were on their way. Samsung also co-hosted the #FEED party, gave away a few Samsung Galaxy phones to new interests (like myself!), hosted a Samsung Galaxy Experience at a pop-up gallery that provided food, drinks, portable speakers, unicorn slingshots, and custom t-shirts, and brought the Purple Genius (aka Prince) to an exclusive closing party where I caught the drumstick that I am currently carrying around in my purse. Winning!

2. Chevy – Chevy’s “Catch a Chevy” promo was ingenious as people battled to get from one side of Austin to another in 4.2 seconds – and in non-stop traffic. The promotion was especially helpful as taxis bowed out this year with the amount of congestion. Chevy was there, and we loved them for it. The promotion has actually been around for a few years – I more than abused my “Catch a Chevy” priviledges last year. This year, however, included an option to tweet and request a Chevy. My apologies again to Chevy for my abuse. The promotion was completely useful, and listening to drivers showcase Chevy features to make the gas worth it was not an issue after a long day of walking. Chevy also provided recharging stations at the convention center and showcased a few new Chevy’s.

3. Yahoo! – had the cutest pop-up gallery of pop culture musings, phenomenal speakers, and branded purple glasses. Though a lot of brands got wave of the branded glasses concept, for some reason purple ones just work. My friends and I could be seen sporting our purple Yahoo!’s all over town.

4. #FEED and Samsung- The app hosted a super-trendy party at a gallery downtown nightly during the Interactive portion of SXSW, complete with an open bar, ice cream, photo booths, a cool 3D wall of tweets, and my favorite – a dark room of musical squares. Jumping on the squares played various keys. Playing with 3-5 friends was most fun.

5. Sonos – They had Erykah Badu and Deadmau5 play a private set… Enough said.

6. The SXSW Corporation – SXSW has grown considerably since its first event in 1987. It has grown from a small music festival into one that showcases the hottest trends not only in music, but in film and interactive as well. They also control pretty much all housing options from Austin to Round Rock, Texas for two weeks; I’d say the true winner is the SXSW brand.

Though I won’t mention any names, the losers were quite clear… A popular car service whose promotional codes must have been truncated at five per day (no one could get a ride), the delivery of stale pizza slices (by a great startup, nonetheless) out of the back of a furry truck (Disclaimer: I did eat one. I was very hungry. There aren’t many things that I am ashamed of, but this is one), and branded underwear and harmonicas by a virtual meeting software company.

Branding has clearly changed – mainly because social media (and possibly hoarding) experiences are preferred over stress balls, ballpoint pens, and branded recyclable bags. Yes, it takes a little more money and thought, but I think we’re worth it. We continue to buy whatever it is that you are selling. I will definitely keep Chevy in mind on my next car purchase, if only because their plush seating was made more plush because I had walked around for a million hours at SXSW.