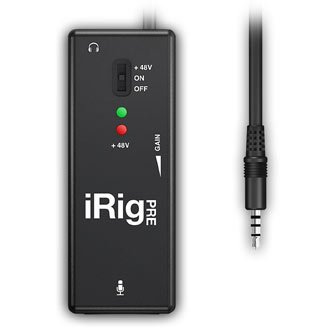 I’ve been a musician for the past 40 years. As much as I love my music (and I really do love it) the actual act of carrying around all of my mixing equipment was starting to wear me down. I mean, I’m 50+ and I have a bit of arthritis in my hands, specifically carpal tunnel syndrome, which makes lugging even moderately heavy equipment around a real chore.

To the rescue have come IK Multimedia with their new, innovative and extremely portable iRig Pre and iRig Stomp. I use the iRig Pre most, an incredibly powerful but super-compact XLR mic interface for the iPhone, iPad and iPod Touch. Without overstating, I can tell you that the iRig Pre has literally made my life much easier.  Even if I wasn’t an, ahem, older guy I’d still be using it because the iRig Pre has made my music recording much easier as well.

It’s ridiculously simple. I plug my mic into one side and my iPad in the other and it’s ready to go. Recording onto my iPad and then mixing my voice and music have suddenly become a dream! I’m serious.  I’ve velcro’d mine to my mic stand and some people don’t even know it’s there it’s so compact.  When I need to use it somewhere else it actually fits in my pocket!!

Now before you get the idea that the best part about it is the portability let me tell you that the sound that I get out of the Pre is amazing. Crisp, clear and just plain awesome. It comes with plenty of chord and 2 free mixing apps too!

If you love your music but hate the crappy sound you’re getting now or just hate lugging around heavy equipment you have to try the iRig Pre and the iRig Stomp.  I’m very pleased with them and will get a couple to give as gifts to my buddies that play and compose as well. As my daughter says, technology is meant to make things simple. Technology like this will keep a lot of musicians in business for a long time – and healthy.