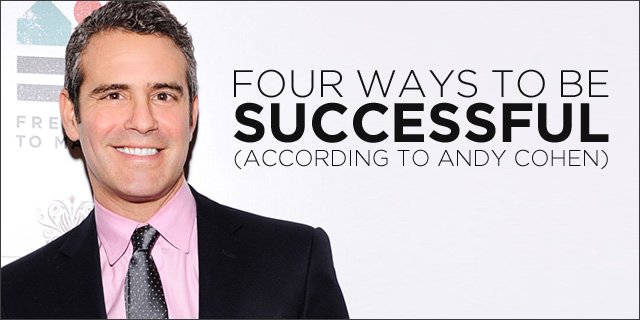 Andy Cohen has been taping his hit show “Watch What Happens Live” on Bravo live from SXSW this week. He announced his plans on Friday, March 8th at a special presentation with executive producer Michael Davies. Andy and Michael talked secret/ exclusive guests for the week, his new book, Most Talkative: Stories from the Front Lines of Pop Culture, and his journey from talent ambitions to executive producer to major talent – and a very popular talent at that. He also gave some life “jewels” to the audience. Here are four ways to be successful in “The Biz” or any other business, according to Andy Cohen:

1. Get a great internship. – Internships can be had at any age. Learn, before you waste your/someone else’s money.

2. Never underestimate the power of The Universe. – A very spiritual concept, he talked about his ambitions to be on screen that led him to working behind the screen, and how one day he was asked to host a reunion show – and the rest is history.

3. Be organic. – Andy says his studio audiences for the show are of no more than 20 people, they all have a glass of whatever they drink, and so do his guests. They play fun games, and Andy participates. Michael Davies says his penchant not to put himself on a pedestal with his guests, is precisely why Andy is winning in Late Night right now.

4. Multi-task. – Andy, very happily, has too many hands in the pot. He is an Executive Producer, Talent, and Hit-maker, continuing to cultivate reality stars like Bethenny Frankel and Nene Leakes. Do a lot of things, but do them well, is an Andy mantra.

I can see that… After all, “Andy Cohen’s got the 411…” If you have never seen the show, you are probably confused. That’s the theme song and my current ringtone!